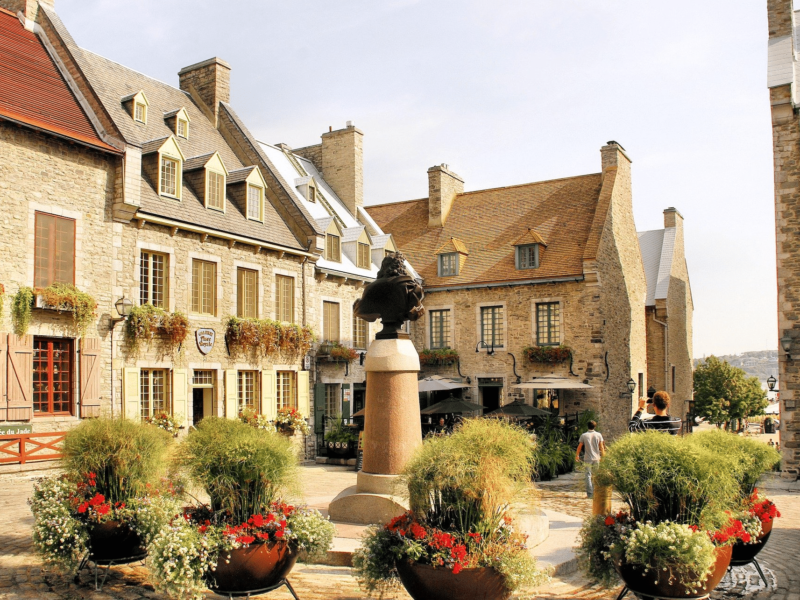 Quebec City is the capital of the province of Quebec. It is the 8th largest metropolitan area in Canada with a population of 705,103 according to the 2016 census data. It is the second largest city in Quebec Province after Montreal. Living in Quebec City, is also one of the oldest cities in Canada and celebrated its 400th anniversary in 2008. Old Quebec, a neighborhood in the city, is the only remaining fortified area north of Mexico. The area was declared a UNESCO World Heritage Site as the Historic District of Old Quebec in 1985.

Quebec City is the 8th most populous metropolitan area in Canada with a population of 705,103 based on the 2016 census. The population grew 3.4% compared to its population in the 2011 census report. Quebec City has a population density of 1,648.8 people per square kilometre.

The most common type of dwelling are other attached dwelling which includes semi-detached house, row house, apartment or flat in a duplex, apartment in a building with less than five floors, and other single-attached house, which 181,245 people in Quebec live in. The least common type of housing is a movable dwelling with only 1,285 people living in such a dwelling. The average household size in Quebec City is 2.1 persons.

Majority of the population in Quebec City are of North American origins, with 480,240 who are Canadians. This is followed by European origins with French people being the most common at 201,770 in total. Here are the top five ethnic origins in Quebec City based on the 2016 census.

Economic immigrants are the most common types of immigrants in Quebec City by admission category. Here is the full breakdown.

Majority of the immigrants in Quebec are from Europe, majority of which are from France, which isn’t unsurprising as Quebec City and the Quebec province as a whole is a predominantly French-speaking area. Africa follows next, majority of which are from the country of Morocco. Oceania accounts for the smallest amount of immigrants. Here’s the breakdown of the immigrant population in Quebec City by continental origins based on the 2016 census.

Jacques Cartier was the first European to visit the area of what is now Quebec City. Cartier brought settlers to establish a French colony in 1541. In 1608, French explorer Samuel de Champlain created the first permanent base in Canada at Quebec, which soon grew to a fortified fur-trading post. It was captured by the British from 1629 to 1632. The Treaty of Saint-Germain-en-Laye restored Quebec City to France. There were numerous attempts to recapture the city, but the British failed. With English-speaking settlers from Britain and the US growing in population, the British Parliament passed a Constitutional Act in 1791 that divided the large colony of Quebec into two provinces, Upper Canada or Ontario and Lower Canada or Quebec. The City of Quebec which was formerly the capital of the large Quebec colony, retained its status as a capital for the province of Quebec after the division.

Although Montreal is the dominant municipality in terms of economic position, Quebec City became a port city with economic cycles of resource demand. The British demand for forest products between 1700s to 1800s fueled the economy of Quebec City. Major developments in navigation and transportation favored the location of Montreal, and thus affected the economy of Quebec City. Nevertheless, manufacturing, a pulp and paper mill built in the 1920s and inexpensive hydroelectric power supported the economy. Now Quebec City is still a leader in manufacturing and other modern industries like green tech and information technology.

Quebec City is a standout attraction in Canada, with a French-influeced history and a friendly vibrant vibe. Just walking around some parts of the city will transport you into a different era in history. But if you have limited time, here are the top 3 things to do or visit in the city based on TripAdvisor.

Old Quebec became a UNESCO World Heritage site in 1985 as the Historic District of Old Quebec. It is the only remaining walled-in city north of Mexico. French explorer, Samuel de Champlain fortified the city in the 17th century, and Old Quebec is the reminder of that history. The upper town of Old Quebec is perched on cliffs overlooking the scenic view of St. Lawrence River and the prairies from miles beyond. Château Frontenac, a historical hotel, is one of the most iconic buildings in the old town with its castle-like structure.

A historic site located 15 minutes away from Old Quebec. It features a 83-metre-high waterfall that is the main attraction in the park. You can admire stunning views in Parc de la Chute-Montmorency through zipline, cable car or ferrata (protected climbing route) scattered throughout the site.

Place Royale is a town plaza that has been an important social centre in Quebec City since its founding. In fact, it is where Samuel de Champlain founded the city in 1608. The buildings surrounding the plaza have a combined French and British influence. The restored houses have become food places and stores that sell souvenirs, arts and more.

Quebec City as the capital of Quebec Province is one of its economic and cultural centres. Its key industries are as rich and varied as the history in the city. It is a place for higher learning and innovation, where science, technology and creativity combined with an entrepreneurial vision create niches of specialization. Here are the top three key industries in Quebec City.

Real estate is booming in Quebec City, and sustainability and green technology are the new foundation of this age-old industry. Thousands of research centres, orgs, and businesses that cater to green technology are headquartered in Quebec City. The city aims to put itself in the global map for the construction of low carbon footprint buildings and to create a legacy for economical and energy efficient infrastructure.

Numerous research centres and organizations in Quebec City focus on food and nutrition research. With research and local agri entrepreneurs dedicated to local and healthy eating, a market of value added products are on the rise in the city. With the global population becoming more aware about healthy living, Quebec City is taking leaps to move the industry forward.

Quebec City is home to a pool of talents dedicated to animation, special effects, digital arts, 3D, multimedia, video games, software, web dev as well as big data and other IT services. It has two main research centres for ICT and Digital Arts, CIMMI for digital and interactive arts and CRDM for big data research.

Here are the five most common occupations in Quebec and the corresponding number of people who work in the listed occupation.