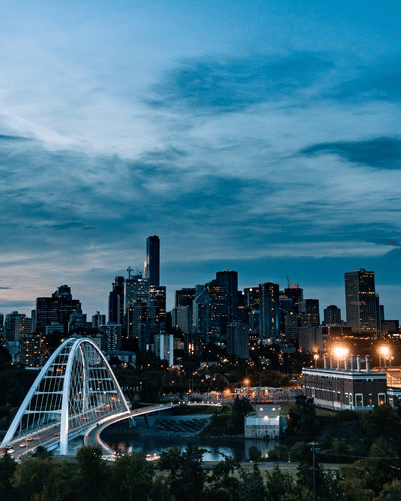 Edmonton is the capital city of the province of Alberta. It is the fifth most populous metropolitan area in Canada. Living in Edmonton, Alberta, the city lies along the North Saskatchewan River in the centre of the province and is considered as the gateway to Canada’s North.

It receives around 2,299 hours of sun a year, which makes it one of the sunniest cities in the country. It is one of the youngest and fastest-growing cities in Canada.

The most common dwelling is a single-detached house with 287,775 of the population living in this type of dwelling. The average household size in Edmonton is 2.6 persons.

Most of the population are either married or living common-law at 627,500, while the remaining 450,730 are never or not married.

Canadians make up the largest proportion of Edmonton’s population according to Statistics Canada. The majority of the population in the metropolitan area is from European origins. Here are the top ethnic origins in Edmonton based on 2016 data.

Edmonton has a very rich demographic. The ethnic breakdown of Edmonton in 2016 is the following.

English is the most common language used in Edmonton. Here’s the language breakdown in the city based on 2016 data.

Other than English or French, here are the most common mother tongue languages used in Edmonton based on 2016 data.

Christians are the majority in Edmonton, followed by people who have no religion. Here are the top religions in Edmonton based on the 2011 census data.

There are more than 100 languages spoken in Edmonton. Here are the overall top 3 most common languages used by the immigrant population.

The first settlers in Edmonton were recorded in as early as 12,000 BC. Anthony Henday was allegedly the first European to explore the area in 1754 in what is now Edmonton. He was working for the Hudson’s Bay Company, which led him to travel across Canada and made connections with the aborigines to build a fur trade. Fort Edmonton was built in 1795 along the river as a major trading post for the Hudson’s Bay Company.

When the Canadian Pacific Railway was built, along with the Calgary & Edmonton Railway six years after, the settlement saw a quick growth. The new railways brought businesses and settlers from other parts of Canada, UK and US, and all over the world, into Edmonton. It continued to attract settlers due to its fertile soil and cheap land. Many people passed through the region to participate in the Klondike Gold Rush in 1897.

There was a decline in population growth after World War 1 from 72,000 in 1914 to 54,000 in 1916 due to enlistment in the Canadian army and families moving to farming lands. It recovered in the 20s and 30s and continued to grow once more, until it has become in what is now known as the bustling metropolis of Edmonton.

Edmonton is also known as the Gateway to the North. It is the northernmost of Canada’s major cities. While winter in Edmonton can be extremely cold, this attracts visitors who want to experience ice hockey, frozen castles or witness the Northern Lights.

West Edmonton Mall is the second-largest most visited mall in Canada, after Eaton Centre in Toronto. It holds the title of the largest shopping mall in North America, and is also the 23rd biggest mall in the world. The mall covers an area of about 5.3 million sq ft. It has over 800 stores and facilities, which includes 2 hotels, 9 attractions, and 100 restaurants.

They provide parking spaces for over 20,000 vehicles. Around 32 million visitors and customers come to the mall annually. It is considered to be the most valuable shopping property in Edmonton. Some of the major attractions in the mall include Galaxyland, World Waterpark, Mayfield Toyota Ice Palace, and Professor WEM’s Adventure Golf.

The park is the largest living history museum in Canada. It features recreations of Edmonton’s rich history in various eras including the Fur Trade Era (1795-1859), Settlement Era (1871-1891), Municipal Era (1892-1914), and The Metropolitan Era (1914-1929). Some of the buildings are the real historical ones brought to the park for display, while others are recreations. It is staffed during summers by historical interpreters in costumes.

This national park is located 35 km east of Edmonton. It is the largest fully enclosed national park in Canada with an area of 75 sq mi. It represents the ecosystem of the northern prairies in Canada. It hosts both the largest (the wood bison) and smallest (pygmy shrew) land mammals in North America.

The metropolitan ecosystem in Edmonton is as diverse as its environment and population. It is the major economic centre for northern and central Alberta. Traditionally, it has been the hub for the oil and gas industry in Alberta, which earned it the nickname of “Oil Capital of Canada”.

However, in recent years other sectors have also been growing rapidly in the metropolitan area. Here are the top 3 industries in Edmonton that are primed for growth and investment.

The Edmonton Metropolitan Region’s location in the Canadian prairies, and among the most fertile and productive farming lands is one of the main reasons why food and agriculture is a big sector in the metropolis. Around 35% of the province’s best agricultural lands are located in Edmonton.

It has around 1.7 million acres of farmland, which are closely linked to producers all throughout the country. With its combined strength in logistics and trade agreements with 51 countries, it has access to over 1.5 billion consumers in the global market. Edmonton hosts the entire chain of the food sector from primary production, processing plants, logistics and manufacturing.

The region of Edmonton is close to the third-largest oil reserves in the world. Energy production has been historically one of its earliest backbone, and is still one of its strongest up to this day. It has received major investments by large multinational companies in recent years. Some of its advantages include complex transportation and pipeline systems, and some of the world’s best infrastructures.

Edmonton has the highest average household income and an affordable living cost compared to other cities in the country. Taxes are lower in the city and there is no provincial sales tax as well. Edmonton also enjoys the lowest prices in gas and diesel than any other place in Canada.

Basic utilities may cost $221.48 monthly, and internet bills may cost $89.73 monthly. A monthly pass for the public transport system in Edmonton costs $97 and 1 litre of gasoline costs $1.80.